skip to main | skip to sidebar

Who knows what's best for us ??

Yesterday night(25th Dec., 2010), I was coming form my colleagues marriage reception in the bus from Majestic to BTM. (The food was yummy there). Bus was almost vacant out and I was sitting alone, at last big 6-people seat. A small kid, age around 4-5 years, come from front seat to my seat. He wanna sit @ window seat and enjoy d chilly winds. But his mom was not allowing to open the window, as it was damn cold and he was having cough also.

Once, he came to last seat, he tried to open window. But, it was quite a tough task for small kid, window was almost jammed-out. He sit quite for 2 minutes and tried again, with more strength this time. Even now it didn't open. 2 tries and both times failure. The kid still not gave up. He tried 3rd time, and not surprisingly, window was not move-an-inch. He was surprised to see, how much efforts, he was putting and its outcome not reflecting at all. And then, his mom called him, his bus-stop had arrived.

This, small incident, teach me a big lesson- "Like his mom, God knows, what's best for us. Even though, sometimes, we put our best effort, try continuously... outcome is zero. In those times, when stuck, have faith in Almighty ..keep trying...either u will succed or definitely, will gain some experience..."
Posted by Hungry.Foolish at 8:22 PM 1 comment:

writing blog after many months..During this time, gone to home, learnt many things, failed many times and trying hard to have same honesty throughout life.

The mantra is - "Fail, Fail, Fail" much better than "Fail, fail, Quit"
Posted by Hungry.Foolish at 2:55 AM No comments:

What Failure teaches, that Success forgets to Tell ?? 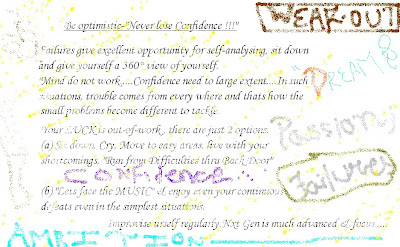 Painted this image during my B. Tech. college days, found out recently during disk cleanup.
Best place to keep it now
Posted by Hungry.Foolish at 1:24 AM No comments:

Are there any secrets to live a happier life, successful life ? What's the shortcut to earn respect in society ? Is there any really special ingredient which we unaware of ? How will I get my genie like Alladin ?

All these answers can be answered by few traits/qualities, that I am reading in a book 'The Laws of the Spirit World'. I am trying to work on them, dedicating 3 days for each, defining them according to my way. Hope it will improve me and make a better human being.

Others to be Continued...
Posted by Hungry.Foolish at 12:04 AM No comments:

What a superb experience it was? I want to participate in 2009 year also, but was not able to. This year also although lot of yes-no-yes-no and finally 'Lets just do it'. So, I participated in Sunfeast Open 10K Bangalore Marathon on 23 May, 2009.

Gone there without any thoughts, expectations, pressure, just with cool-calm mind. What I learnt while running those 10,000 metres was just unexpected. It was so much of self-motivation, brain was running like computer, ideas keep pumping in. I was truly amazeed by atmoshpere. I always used to think, why people say 'Run for Oneness', shout 'We Care', cheer for some unknown person..and all those I-thought-logical questions. Most of them got answered by themselves.

Just to tell, while running I was fully tired,having lot of pain in ribs, almost thinking to take break for 10-15 minutes and suddenly, see some senior citizens cheering for others. Oh God, it was awesome inspiration. Instead of stopping, I just continued and after few minutes pain gone automatically.

After so many such incidents on that day, I realize importance of such Public Gatherings. I hope to continue participating in such festival-kinda-atmosphere events and improvize myself as a better Human Being.
Posted by Hungry.Foolish at 1:49 AM No comments:

Will complete this post soon...
Time to collect some more.....
Need them badly

Posted by Hungry.Foolish at 12:08 AM No comments:

Life's best time to improve yourself, is when you think everything is going fine. Its universal truth that every good phase will be followed by bad-one and then, good and cycle continues till one's last breath.

For me, bad/dark/tough phases of Life always have some acid test. And, one thing that really helps me, are some inspirational thoughts, statements, comments, dialogues etc. In order to share them with everyone, I will keep writing them. Most of them are not mine, taken from some newspapers, books, magazines, interviews, friends.

They don't matter much, when life is going smooth like butter, but really encouraging in losing times. Your positive thoughts are also welcome. 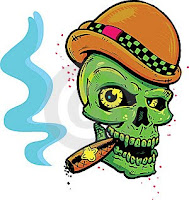 "Do you know? Smoking is stylish, cool and macho. It makes you more hip-hop youth, sporty and awesome. People will talk about you, follow you and will become your fan. Yes, Smoking is shortcut for being -Mr. Most Popular Dude."

Today, in morning, I had seen a group of 4-5 school boys, average age of 15 years, with very old and yet most fashionable trend of puffing "Cigarettes". I think above lines are what, those kids think. Either, they are from Bangalore,Delhi,Agra or anywhere in this world, their mindset is same.

They have very wrong vision of Cigarettes. What I know about Cigarette is, that they are used for stress-busting by people. Cigarette contains very harmful nicotine drug, which increases body response time for some minutes. So, higher body response time means you get an illusion of relax mind and great calm. And, thats why Smoking comes in this world, as a stress-buster.

I think, it is worstly-affected Addiction in this world. Most of people may know that :- "One cigarette reduces your life by 11 minutes" . And, it's not a joke, but scientific proven fact.

Isn't Smoking the most boring way of living your life- where anyone can easily predict the future?

Common Guys, give us a break and show some new energetic way of living the life.

What I hate about myself ?

Post that I don't want to write publicly, but blog is all about "Being Yourself" - either good or bad its you. Is liye likh diya hai.

Others can add much more here than me. But, few things I also hate about me and want to change are as:-

One positive point here is, if someone knows his shortcomings, its relatively easy to overcome them as compared to unnoticed shortcomings. So, all your tough nail-biting comments are welcome.

"In a day when you don't come across any problems - You can be sure that you are travelling in the wong path."- Swami Vivekananda.
Posted by Hungry.Foolish at 6:13 AM 3 comments:

My Obsession in Life

All about what I love food, movies, books, shows and many more.

My most watched Movies. These movies I will keep watching forever, I think they are evergreen.


Food that I am always dying to eat.
My Favorite Books
Only one thing I can said about this book..."Now, It's my inspiration in Life. If in future, I get some success in life, this book will have a huge hand in that."

"There is nothing like stupid questions, only stupid answers."

This famous phrase, I had heard once in school and have changed my life a lot. Since,then, I am asking all stupid questions, and people around me going crazy.

But, sometimes, I feel my questions are very valid. There are some questions, I have asked to many people, but not able to get proper answers. Hope, anyone in this world, answers me in detail. You can also have a look at them.

1. "God has created this world. But, from where, God himself comes into existence? How he suddenly comes from nowhere and he got so much power?"

If you are atheist, what I want to ask is,
- "How does first element is produced from nowhere ? Even for big-bang theory, you need some raw things. From where they come ?"

Many people have given me answer, that your answer is hidden in "पहले मुर्गी आई या अंडा" puzzle. But, I want to ask them, at least tell answer of that puzzle itself. "Ek solution mila nahi, dusri tension bhi de di !!!"

After such intelligent question, I also wonder on some other things:-

2. "If there is no blue sky covering earth, how it will look?"
Many times, I try to think about it and ends with some mind-vomiting feeling. Toooooooo much imagination. You also try once.

More itchy questions, once they strike in mind.

-Rahul
"If I am not asking questions, it means, I am not able to understand your words at all."
Posted by Hungry.Foolish at 5:23 AM 1 comment:

First Gmail, then Orkut,Linkedin, after that all day Facebook, GTalk,Twitter etc.

Its more like that "Instead of being master of mind, u r its slave."

To overcome these, so called Social Networking Addiction, I am going to break away from them completely for full 2 weeks. Yup, u read correct, 14 days.

Honestly, its like a fast. Not fast of food, but from Social Networking Addiction. Let me take a honour, to launch this new Diet for all such addictors like me.

For me, first expected "SoNet Diet" is from 30th January,2010 to 12 February,2010.
Ofcourse, its really tough to include Gmail here, because its importance is like that of water in life. But, its mimimal use depending on requirement.
Also, blog is not included in this diet.

C U All and be Merry Makers,
Rahul
Posted by Hungry.Foolish at 5:03 AM 4 comments:

This is my first public blog. Just started today, blogging, because want to start something completely new in life. Not much expectation from it. Just a stress-buster.

Today, on 27th Jan, two of my friends - Chandreshwar Pratap Madhesiya and Arpit Mehrotra- nickname as- Chandu and Chhota respectively, have completed 1 year in IT industry. My best wishes to both of them.

Let's see whether bonding between me and blog really strikes like that of other social networking websites like orkut, facebook, twitter. Anyways, I am thinking of Social Networking Strike (better known as SoNet Strike) for one week, because of my addiction to them, for atleast every alternative week from february., the coming Monday.

Cheers and be Energetic.

Rahul
Posted by Hungry.Foolish at 5:36 AM 2 comments: